Additionally, Mr. LaRoe has been recognized for his personal commitment to excellence in sustainable business. He is a founding member of the North American chapter of GABV and was elected to the organization’s board of directors for a three-year term from 2014-2017. Mr. LaRoe was selected by Orlando Mayor Buddy Dyer to chair the Sustainability Committee for the Green Works Orlando Task Force in 2017, where he promoted better environmental initiatives throughout the city, such as energy-efficient buildings, green transportation, water conservation and overall livability. Mr. LaRoe himself is a LEED Accredited Professional. His family residence is solar-powered, and his mountain home became the first residential LEED Platinum in North Carolina.

Working to promote positive change in society, Mr. LaRoe has dedicated many hours to community service and spearheaded new initiatives that continue to make a large impact on people and their families. For example, Mr. LaRoe has been honored by the Lake County Board of County Commissioners with a certificate of appreciation for the many hours of service he volunteered to Lake County and its citizens.

Mr. LaRoe is an active board member for the Brain Injury Association of Florida. Inspired by Mr. LaRoe’s wife, a physician who suffered a brain injury during a cycling accident and found relief through her artwork, the couple founded the Art of Medicine Foundation. Through the foundation, Mr. LaRoe and his wife, Cindy, made it their mission to raise money for the prevention, diagnosis and treatment of traumatic brain injuries. In 2015, LaRoe played an integral role helping host the first ever Art of Medicine Gala and has continued the bi-annual event to raise funds for brain injury research.

Resulting from Ken’s interview on Tuesday, CNBC published “Trump bank regulator incurs Wall Street ire on his way out the door,” an article analyzing the OCC’s controversial Fair Service rule. Ken’s commentary features strongly throughout the second half of the article, discussing impacts the rule may have on small banks and on the “compelling” investment potential of banks operating with ESG principles such as Climate First Bank. 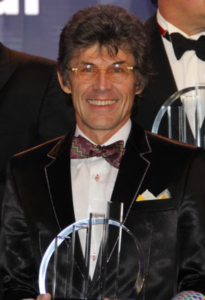